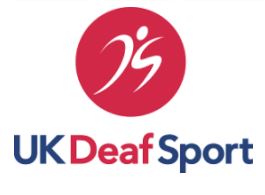 To Whom It May Concern

UK Deaf Sport (UKDS) has been working with the English Football Association (The F.A) and England Deaf Football (EDF) in establishing the framework for Deaf football in the UK.

We recognise the efforts of the Deaf Champions League (DCL) committee in setting up the competition and are in agreement with your constitution and rules. Our understanding is that it should mirror the actual Champions League as much as possible but for Deaf football.

On that basis the qualification process to the DCL for teams from the UK needs to be updated to reflect this.

Currently teams from the UK qualify via the British Deaf Cup and the BDF Fustal Cup organised by British Deaf Football (BDF) and this will continue to be the case for DCL 2018 and DCL futsal 2018 for qualifiers from the 2016-17 football season that has just completed.

While this has worked well during the early years of the DCL, according to the DCL constitution it states:

Club qualification to the DCL is determined by the Deaf rankings of the national country domestic League or Cup. If a country has Cup and League, then the League has priority. The winner of each country’s Deaf Cup or domestic League is given priority to qualify for the DCL.

The number of qualified teams will be determined by Technical rules (Futsal/Football).

All Clubs of each country that enters the DCL must be member of club’s National Deaf Sports Federation, whom is affiliated to European Deaf Sports Organisation.

In DCL Football Rules and Regulations it confirms this:

As stated in your constitution if a country has League and Cup competitions, then the champions from the domestic League has priority for qualification to the DCL.

If you have any queries please do not hesitate to contact them.